The story of A Night with the Knight of the Burning Pestle takes place one evening – 21 December 2016, to be precise – during and around a performance of Francis Beaumont’s play The Knight of the Burning Pestle. The play itself has many layers, being actually two plays within a play. I took it all one step further by wrapping another story around the original, about a romance between two of the actors during this modern-day production, and following them backstage.

If that sounds confusing, it probably is! But the sheer sense of chaos, the exuberant feeling that anything might happen and probably will, is one of the joys of Beaumont’s play.

As a way of helping with the potential confusion, I’ve created a mock theatre programme for the production I’m writing about. It includes short articles on Beaumont and his play, along with information about the characters, and the structure and locations of the scenes. You might care to keep it nearby while reading, just in case (like any actor on any given night) you would like a little prompt now and then.

The programme is free to download, and I’ll have printed copies (also free!) with me if you come find me at various events.

Here is that link again, for the 8-page PDF mock theatre programme!

Image credits, with thanks:

I had fun with finding portraits to serve as the actors’ headshots – which, in real theatre programmes, often look little like the present-day actor let alone the character they’re playing. But please do feel free to imagine the characters’ appearance in any way you wish!

You will often find a Poet for Hire on the banks of the Thames near Shakespeare’s Globe. You provide a prompt, they type out a short impromptu poem, and you pay what you like for it. I love the whole idea, greatly admire their creative derring-do, and have indulged a couple of times.

This time, my prompt to poet Edmund Davie was “The Knight of the Burning Pestle” – and while he didn’t already know the play, he produced something that is so very perfect for Rafe. 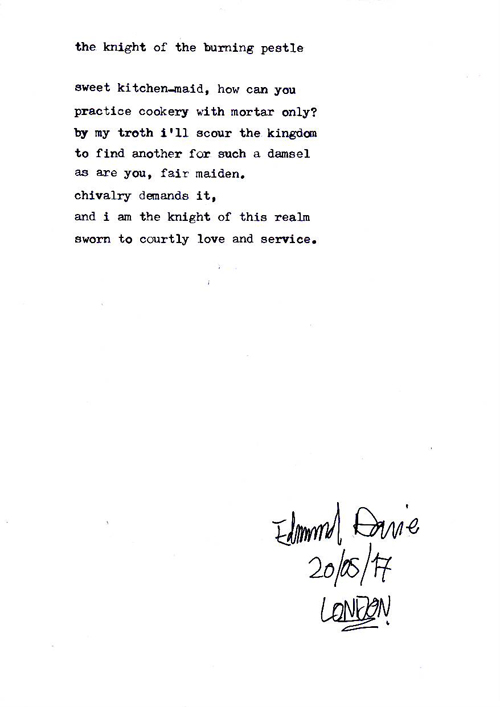 sweet kitchen-maid, how can you
practice cookery with mortar only?
by my troth i’ll scour the kingdom
to find another for such a damsel
as are you, fair maiden.
chivalry demands it,
and i am the knight of this realm
sworn to courtly love and service.

END_OF_DOCUMENT_TOKEN_TO_BE_REPLACED

Haven’t done this for a while… (Well, it amuses me, anyway!)

END_OF_DOCUMENT_TOKEN_TO_BE_REPLACED

I have created a quiz on Goodreads for this novel. You can find it here.

A quote from my novel…

There is now a quiz on Goodreads about this novel. You can find it here.

Some quotes from my novel…

END_OF_DOCUMENT_TOKEN_TO_BE_REPLACED

I have created a quiz on Goodreads about Albert, Fletch and Garrett. You can find it here.